The Secret Life of Plants lives on!

Almost 5 decades ago, the book “The Secret Life of Plants” was first published. Like many other works from the early 70’s it was inspired by the mind expanding movements of the time. And like some of the inspirational themes of the 70’s it has stood the test of time and grown and evolved into present day. Essentially the book follows several scientific explorations and philosophical deliberations on the mysteriousness of plant life. On the scientific side, the book follows as a CIA polygraph expert connects his polygraph to a plant on a whim. Only to be amazed and instantly convinced that plants possess an acute awareness and response behavior to other living things in its environment. The subsequent flurry of polygraph tests that Cleve Backster was to embark upon would change the course of his life and that of many others. The most significant results of his vast researches were focused on the direct reaction that his plants had to human thought. Backster’s remarkable ability to record a plant’s reaction to human activity inspired the scientific community to respectfully term the phenomena “The Backster Effect”.

The Secret Life of Plants also explored the more spiritual side of flora. Goethe is portrayed as aromantic rouge who becomes enraptured with plants and flower and postulates on the miraculouss implicity and dynamic portrayal they give to the most basic fundamentals of all life. Many a hippy will recall The Secret Life of Plants as a pillar of validation for their newly found liberated perception of life. Those were days of breakthrough for human rights and a time for the individual to embrace their own creativ 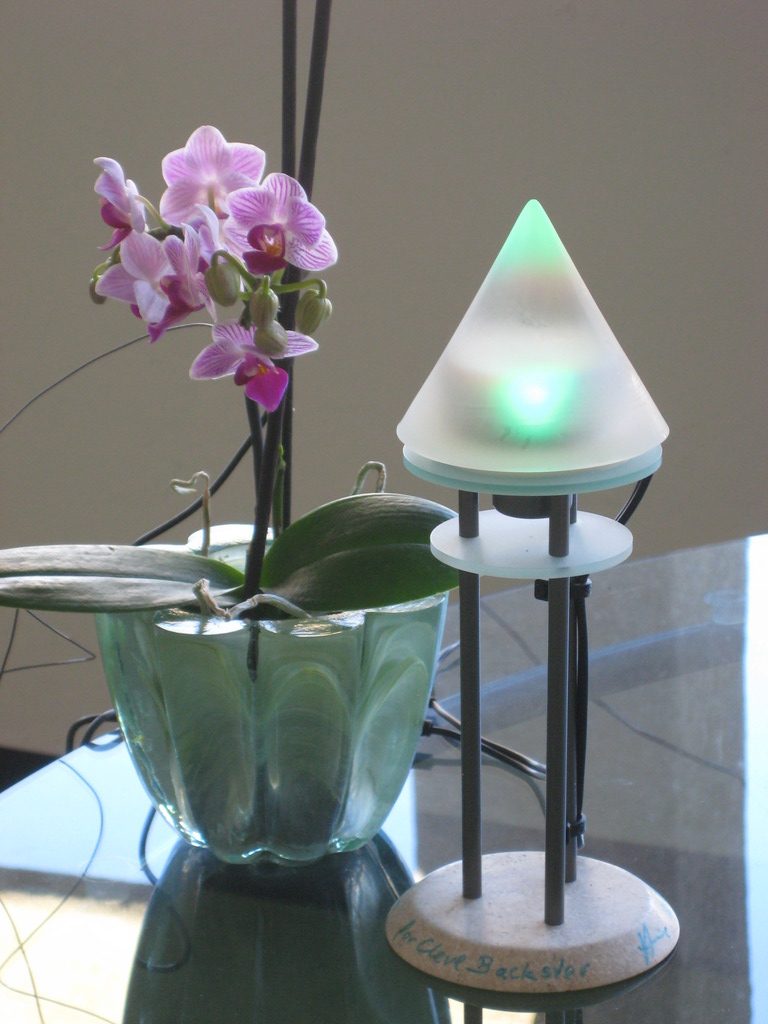 e urges and discover new arts and music. It was also a time for the breakdown of old stale ways of looking at life. And in this struggle for new to emerge from the old the book represents a piton for much of today’s new age movement. But many will look back at that time of liberation and unbridled expression and glibly ask “but where are they today?” Well the saying is true…everything that’s old is new again.

Almost 5 score after its birth there has been the reemergence of the Backster Effect, only this time it’s all dressed up in today’s technology. It’s called a Floranium and it is an elegant fusion of an ultra sensitive detector which is wed to the leaf of a living plant. The magic in this marriage is that as the plant reacts to other living things in its vicinity those reactions are put through a mini processor that then translates them into an amazing colored light display. Back in Backster’s day the needles on his cumbersome polygraph would go scribbling away on a rolling sheet of paper as his plants responded to people. The Floranium having just a couple of discrete wires and a much greater sensitivity reveals the subtle reactions of plants in a multicolored array of lights. Simply by interacting with your plant you can see immediately the lights changing color indicating that the plant knows you are there. The old wives tale of talking to your plants has all of a sudden taken on a whole new meaning. So small is the hardware portion of the Floranium it is unnoticeably tucked underneath the multi-colored votive. It is perfect for home or office and will continually give you a way to see what your plants are telling you.

So thanks to Cleve Backster and his bold inventions of yesteryear which today have evolved into a multipurpose elegant technology that will have people talking to their plants across the world…and getting an answer back!

I wish I could remember who was responsible for that most life changing gift I have ever received: The book“The secret life of plants” on my 15th Birthday. I started to read about Cleve Backster and others whom where experimenting with plants, their bio-signals END_OF_DOCUMENT_TOKEN_TO_BE_REPLACED

Almost 5 decades ago, the book “The Secret Life of Plants” was first published. Like many other works from the early 70’s it was inspired by the mind expanding movements of the time. And like some of the inspirational themes of the 70’s it has END_OF_DOCUMENT_TOKEN_TO_BE_REPLACED